Water buffalo do their bit on the golf course

One of Vietnam’s leading golf courses, Laguna Golf Lang Co, is utilising the talents of a very special group of greenkeepers: a family of water buffalo.

The Sir Nick Faldo-designed course is shared between man, machinery and beast. 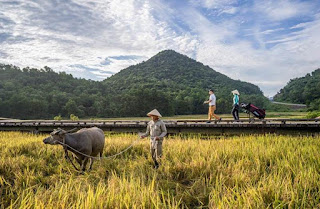 “We are pretty sure it’s a first in this part of the world to have animals performing such an important role on the golf course,” said Adam Calver, Director of Golf at Laguna Golf Lang Co, of the work carried out by father Tu Phat, mother Chi Chi and their calf, Bao, tending to four-hectares of rice fields located right in the middle of the course.

The paddies contour the third and fourth holes and reappear on the back nine between the 13th green and 14th tee and run alongside the 15th fairway.

In the early days of golf, when courses were mostly laid out on public land it was not uncommon for sheep and cattle to roam freely across fairways and greens.

Even today at some courses – notably the wilder links courses in remote regions of Scotland and Ireland – livestock play their party in trimming turf and thinning out rough.

Courses in Asia though have been less willing to let animals in on the greenkeeping act - until now that is," said Calver.

"Even on the quietest days, the water buffalo are always out wading through the rice paddies and performing their duties.

“We looked at various methods to increase the aesthetics of the rice paddies between the harvests as continually mowing the fields to maintain vast rice terraces can consume a large amount of labor.

"The water buffalo act as bio-mowers while also protecting the traditional Vietnamese landscape.”
Posted by Winsor Dobbin at 00:07