Technology has seen airlines, airports and hotels cut their staff and rely on computers for many tasks. But what happens when things go wrong?

Chaos is the answer as these entities find themselves without enough staff to cope if a computer system crashes. Who pays the price? Travellers. 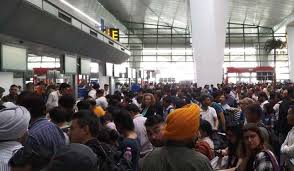 US airlines yesterday suffered a system-wide ticketing failure, leaving some passengers unable to book tickets or check in online or at airport kiosks.Airlines that were affected include American Airlines, Alaska Air, WestJet and JetBlue.

Earlier in the week, an Australian Border Force system outage caused major delays at international airports across Australia, affecting passengers departing from and landing in the country.

SmartGate epassport control machines were down at all international airports, causing lengthy delays and huge queues. There were, apparently, no back-up systems in place.

An Australian Border Force spokesperson said his organisation was working with the Department of Home Affairs "to resolve an IT systems outage impacting inbound and outbound passenger processing at international airports".

"Additional ABF staff have been deployed to process passengers and to minimise delays," the spokesperson said in a statement."Passengers are encouraged to arrive at airports early to allow additional time for processing."

ABF controls the SmartGate passport machines, which use facial recognition technology along with ePassports to check travellers' identities.

Meanwhile, a five-hour shutdown of Air India's check-in software, which occurred on Saturday morning, was still causing its ripple effect with 137 flights delayed on Sunday.

The average duration of delay would be over three hours.

Air India's passenger service system software, which looks after check-in, baggage and reservation, did not function for over five hours.