Discover the hotel with a fascinating Cold War secret


A new tourist attraction has opened in the Postojna Cave Park's Hotel Jama in Slovenia.

One of Slovenia's highest-rated hostelries used to be a far from ordinary hotel. 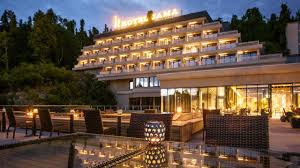 It has some secret rooms, where unusual activities took place in former Yugoslavia.

Now, guests can roll back the years and discover what was really going on in these rooms decades ago.

Under the former regime, Hotel Jama lived a double life. Its secret rooms were not discovered until the hotel underwent renovations in 2016.

Since it was built in 1971, Hotel Jama has accommodated thousands of visitors to the world-famous Postojna Cave.

But some of the rooms bear witness to the activities of the secret services of the former socialist system.

Hidden inside the hotel building is a communications centre, which raises more questions than answers.

Who built it, what was was going on here, what was it used for and why was it secret?

The stories are firing people's imagination and causing quite a stir.

The Secret Rooms of the Hotel Jama is described as "a documentary, exciting and entertaining experience".

While touring the rooms, guests can learn some history, listen to archival eavesdropping recordings from that period and visit an authentic communications centre.

The tour takes an hour and a half and is available in Slovenian and English. It is suitable for adults and children over the age of 15. The group size is limited to six people. It starts at the reception of Hotel Jama, where you will meet your guide. All other details are being kept secret.

For more information about the tours visit www.postojnska-jama.eu/en/