Doing good. The story of the chef, the winemaker, his grandson and the turtle

Chef Alessandro Pavoni from Ormeggio at the Spit (below) is partnering with veteran winemaker Garry Crittenden for a special cooking class on January 5 with a message to help reduce waste plastic that ends up in waterways and harms marine life. 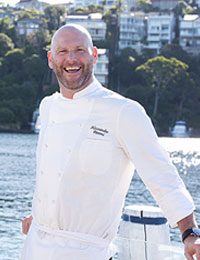 Back In 1997 Garry Crittenden was the first Australian winemaker to sell arneis, a food-friendly, northern Italian white wine. Despite an increased interest in Italian varietals, 20 years on arneis hasn’t proven popular enough to be viable for Crittenden Wines and they’ve grafted it over to the ever-popular chardonnay.

The current vintage (2018) is the last and, motivated by his six-year-old grandson Oscar, who is passionate about saving turtles from waste plastic in our oceans, Garry has called it Endangered. He explains: “Both the turtles and lesser-known grapes, such as arneis, will cease to exist if something isn’t done to protect them.”

Inspired by Molly Steer’s Straw No More documentary, Oscar painted a picture of a turtle for his grandfather for Christmas last year.

That picture now graces the label of the 2018 Endangered Arneis and $20 from every dozen bottles sold goes to Australian Seabird Rescue in Ballina on the NSW North Coast, which treats injured sea turtles and seabirds. Being relatively small, plastic straws are easily ingested by turtles and other marine life.

Along with many in the hospitality industry, chef Pavoni shares concerns about plastic straws, and has eliminated them from his restaurants: Ormeggio at the Spit, Chiosco, Via Alta and Sotto Sopra.

Hailing from Lombardy, he also shares Garry’s love of northern Italian grape varieties, and has written the menu for his upcoming class to complement the Endangered Arneis.

He’ll be teaching how to prepare crudo of yellowtail kingfish with cherries, spaghetti risottati with tartare of scarlet prawns, and pumpkin and burnt butter risotto with pan-fried red mullet, which guests will then cook for themselves before sitting down to enjoy their seafood feast with a glass (or maybe two) of the Crittenden Endangered Arneis 2018.

Alessandro’s class is from 11am-3pm on January 5 at Sydney Seafood School. For more information, call (02) 9004 1111 or book online at www.sydneyfishmarket.com.au

To purchase the Endangered Arneis 2018 and help save the turtles visit
www.crittendenwines.com.au/product/Endangered-2018-Arneis
Posted by Winsor Dobbin at 00:59