It was once the icon of European railway travel but now Eurostar staff are threatening to strike over what they describe as a "system meltdown" and "shocking working conditions".

All its trains use the Channel Tunnel between the United Kingdom and France.

Rail workers union RMT said station staff at St Pancras, along with Eurostar train managers, will strike for 48 hours on Sunday, September 30 and Monday, October 1. So check your travel schedules.

The union said workers are in a dispute with management over "shocking and dangerous working conditions resulting from repeated service failures and breakdowns".

The union says the international terminal at St Pancras , which has only been operational since replacing Waterloo International in late 2007, was "reduced to chaos" over the summer following a spate of service problems, with staff left to bear the brunt of public anger. 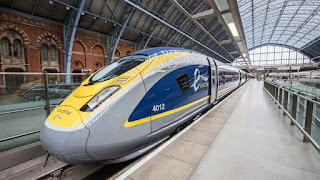 RMT general secretary Mick Cash said: "The conditions at St Pancras have been simply appalling over the summer with dangerous levels of overcrowding on the concourse as services plunge into meltdown on the cusp of the busiest part of the year. RMT will not tolerate a position where our members are left to pick up the pieces due to corporate failures.

"Eurostar train managers are now joining this dispute after a recent ballot and will also be striking alongside their station staff colleagues.

"The union remains available for genuine and serious talks that will bring about guarantees to resolve the situation."

His statememt added that workers at the French end of the Eurostar operation have also registered their "disgust"' and have taken action in an attempt to force the company to act.

A spokesman for Eurostar said the company was aware of the planned strikes and is disappointed the action is planned.

"We are meeting with the RMT next week to discuss this further and hope to find a solution," he said.
Posted by Winsor Dobbin at 23:42