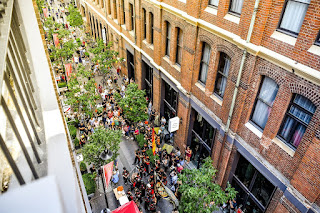 It is a Monday night at Kensington Street, one of Sydney's hippest new dining precincts.

While the suburbs may be snoozing, Kensington Street's eateries, bars and cafes are doing a roaring trade. 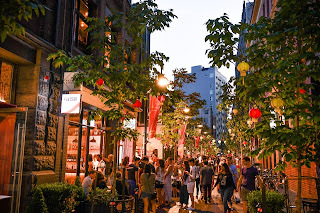 There's a friendly vibe, too, and I'm grateful to the PR friend who asked me to go exploring. So grateful that I return the next day for some further investigation.

Award-winning Automata, where Clayton Wells is the man behind the pans, and lively Kensington Street Social, where I have dined previously, are two of the main drawcards of the precinct, but both are closed on Monday nights.

Instead, I am visiting chic Sicilian-themed Olio (below) and the hip Eastside Kitchen and Bar for dessert. 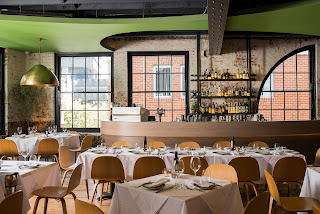 With a post-industrial chic theme, Kensington Street comprises part of a former brewery building with a range of wharehouse-style eateries, converted heritage cottages and 11 hawker-style outlets on Spice Alley (below).

There are 12 different restaurants, four bars and a couple of cafes as well as the much-vaunted Old Clare Hotel. 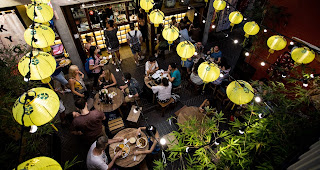 Kensington Street fully launched in 2017 with the opening of Olio, Eastside Kitchen and Bar and The Private Kitchen within the Old Rum Store building.

The precinct is the creation of Dr Stanley Quek and is part of the $2 billion Central Park redevelopment - Sydney’s largest mixed-use project featuring apartments, offices, retail and eateries.


Dr Quek had a dream to create a community and Kensington Street forms the heart of this vision with its its edgy, but completely safe, atmosphere. 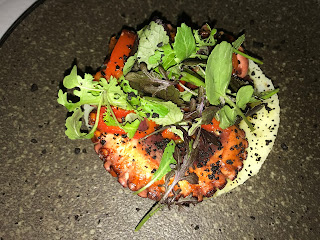 After an amuse bouche of smoked salmon; some freshly shucked oysters, natural and with a raspberry vinaigrette, and citrus-charred Freemantly River octopus on crushed lemon potato salad, mint-roasted capsicum and olive powder (above).

Both are beautifully exucuted and served with aplomb by our charming waitress, a native of Napoli.

The mains shine even brighter, however, with my companion impressed by his Controfilleto (char-grilled Derby Wagyu sirloin with portobello mushroom and beef jus, and myself opting for a quite superb raviolo dish made with king prawns, black truffle and burrata sauce. Sensational! 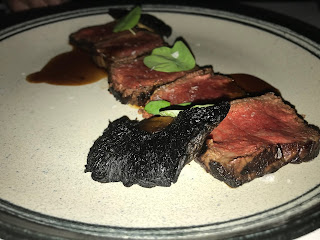 There is a style about this casual place with serious food; quality ingredients are treated with respect in the kitchen, the staff are both amusing and informed, and the wine list has a distinctly Sicilian focus with a good range of wines available by the glass.

We would have happily enjoyed dessert here here, but headed instead down the stairs to Eastside Kitchen, where a spectacular "Fire and Ice" dessert platter awaited us. 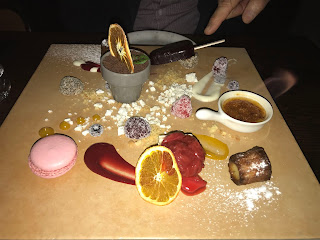 The dessert selection on the $44 platter differs depending on what’s in stock and what the chef picks; but all of his electic choices were delicious.

Part meal, part performance art, this is highly recommended for for anyone on a romantic date.

The next lunchtime I check out Spice Alley, a slightly less chaotic take on a Singapore hawker bazaar with 11 outlets that dish up a diverse selection of Asian cuisine to hungry office workers. The experience is BYO and speeded up by cash-free transactions.

My choice of sambal fish (below) proves a spicy and affordable winner. 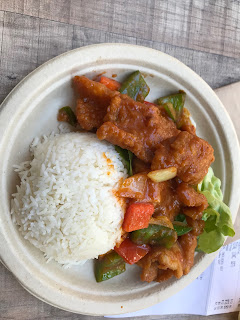 Kensington Street is home to a large line-up of events with everything from spectacular block parties that see up to 30,000 visitors to intimate Michelin-starred chef dining series on the calendar.

It has become known for its block parties such as the Lunar New Year and FRINGE festival events, which combine street performances, themed workshops, food and music.

Kensington Street is also home to 10 unique event spaces which cater to everything from Chef’s table private dining, weddings and product launches. The precinct is open daily from 10am till 11pm (hopefully it will open later in the future).

The writer was a guest of Kensington Street but returned at his own expense
Posted by Winsor Dobbin at 01:01