Sydney wine lovers have yet another wine bar in which to taste an impressive range of local and imported vinos.
Mister Percy, a Mediterranean-style wine bar and kitchen housed in the heritage-inspired designer boutique hotel Ovolo 1888 Darling Harbour opened this week. 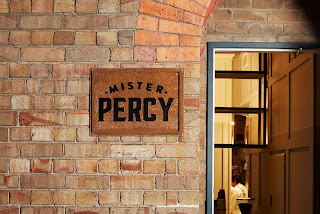 Named after Percy Ewart, a former wool classer at the original woolstore who also made his mark (literally) by etching his name in the sandstone building, Mister Percy offers both a menu and wine list inspired by the arc of countries surrounding the Mediterranean.
The former 19th-century warehouse fronting Murray Street, Pyrmont, will be open every night of the week from 6pm and will seat up to 60.
Leading chef Justin North (hello Justin!) has collaborated with Ovolo Hotels and head chef Luca Guiotto (ex-A Tavola, Catalina) to develop a coastal European menu showcasing Mediterranean flavours and techniques.
It includes a selection of skewered snacks or pinxtos, small and larger share-style dishes and Australian artisan cheeses, such as Holy Goat and Pyengana.
Signature plates include citrus-cured hiramasa kingfish with horseradish yoghurt; and pinxtos such as manchego cheese, prosciutto and picholine olives. 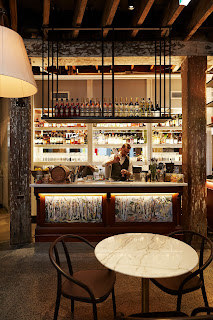 Ovolo Hotels' group wine curator, Shun Eto, has curated a 100-strong list mainly of Mediterranean-style wines and varietals.
The vibe is towards smaller producers (with the winemaker highlighted), including AJ Hoadley from La Violetta, Conor van der Reest from Moorilla, Mike Aylward from Ocean Eight and Vanya Cullen from Cullen.


Many of the wines are offered by quartino (250ml pours) and there is a good selection of wines from Italy, Spain etc, although none from Portugal or Croatia. There is a de rigueur sprinkling of natural wines, including Radikon.