Leading wine critic, and living legend, James Halliday AM unveiled the winners of the Halliday Wine Companion Awards 2019 (a tad early, but there you go) last night at the National Gallery of Victoria.

The awards are based on the results produced after months of tasting by James and his expert tasting panel, which includes some of the best palates in the land.

The book is on book shelves this morning. 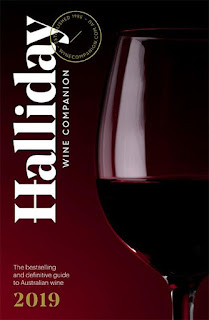 More than 9280 wines were tasted for this edition, published by Hardie Grant, with full tasting notes for 3864 wines, ratings, drink-to dates and prices for a further  2906 wines provided by 1216 wineries (including 67 new wineries).


Brothers Matthew and Jonathan Hughes of Mewstone Vineyard in southern Tasmania took home the award for Best New Winery, while Yarra Valley pioneer Seville Estate was named Winery of the Year in tribute to the great work done by winemaker Dylan McMahon.