Believe it or not, Tasmania now has a museum devoted to poo 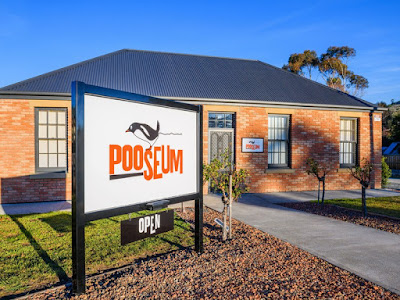 It may sound like an April Fool joke, but Tasmania now has a museum completely devoted to poo.

Located at Richmond, just outside Hobart, the new Pooseum is billed as the place where the fun is in learning all about number twos.

The team behind the venture says they are scientists "pooologists", in fact, who get to the bottom of the matter and aim to make a splash in the world of poo science.

It turns out that humans tend to view poo as taboo, discretely doing it behind closed doors and flushing it away as quickly as possible. But animals in the wild see poo as something valuable – it can be used, re-used, recycled and even played with.

The Pooseum offers the chance to learn about the work of veterinarians, biologists and ecologists who draw vital conclusions from examining animal poo; paleo-scatologists who study fossilised poo to find clues about the diet of prehistoric animals; and other scientists who are working on ways to make use of the still largely untapped potential of animal poo in areas such as energy production and medicine.

The Pooseum says it is "the first science museum dedicated solely to animal scats", ad it does have a strong educational focus, displaying 12 large information panels, 32 smaller panels on a wide range of specific topics, and three screens with educational videos on topics such as how electricity can be produced from dung, and how collecting the droppings of endangered animals helps protect their habitat.

In the Digestion Room visitors can learn about the digestive system of carnivores, herbivores and omnivores. A large touch screen shows 3D models of the digestive tracts of 10 different animals.

Exhibits include fossilised dinosaur poo (coprolites), the skulls of a Siberian tiger and a kangaroo, and a photo book with pictures of scats of animals from around the world.

A large display with real scats of Australian animals gives visitors the opportunity to guess which animals dropped them.

Translations of all information is available in both Chinese and Japanese.The Pooseum is 22 Bridge Street, Richmond, Tasmania. It is open Wedneday-Sunday 9.30am-4.30pm. +61 413 802 206. www.posseum.com.au
Posted by Winsor Dobbin at 23:35