Images of a rather cheeky snake in a Tasmanian vineyard have become a global sensation. 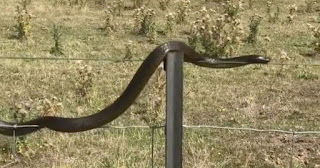 Bangor Vineyard Shed owner Matt Dunbabin recorded footage of a tiger snake using a wire fence on his Tasman Peninsula vineyard as a tightrope.
Dunbabin said that tiger snakes were quite a common site on the estate, but he had never seen one climbing before.
“We see them quite often on the farm, and it is wonderful to have them around. It was definitely a fascinating thing to see – what great poise and balance," he said.
“After I took the video he continued on his merry way, and I guess he climbed back down to the ground when he’d had enough up there.
“Oh, and for those a bit concerned about having to share their next glass of wine, or wedding, with him – don’t worry, this is right down the other end of the farm.”

The story has been reported in media across Europe and North America.
Here is the link: https://www.instagram.com/p/BfIIUqlF3ca/?taken-by=bangorshed
Posted by Winsor Dobbin at 00:17