The Trump Slump. Tourism numbers to the US plunge.

Earlier today, I received an email offering return flights between Sydney and Honolulu for $404 return - a ridiculous bargain.

Flights to Los Angeles and San Francisco are available from $846 return from Sydney, Melbourne, Brisbane, Perth, Adelaide and the Gold Coast on a wide range of dates from mid-January to May 2018.

The reason? The Trump effect. 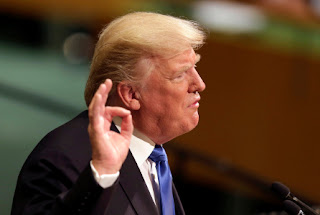 As I predicted 12 months ago, many people just aren't that keen to visit a place run by a pussy-grabbing right-wing nutjob who treats foreigners with disdain.


Here's what I wrote about a possible boycott 12 months ago:
http://gourmetontheroad.blogspot.com.au/2016/11/is-it-time-to-conside-boycotting_4.html

Now the full metrics of inbound travel to the US this year won’t be known until well into 2018, but if those numbers follow the trend of the first half of 2017, they won’t be good for the US tourism industry.

For the first six months of the year, the number of international visitors coming to the US declined by 3.9% - a massive slump - data released from the US Department of Commerce National Travel and Tourism Office shows.

In total, an estimated 33.8 million non-resident international travellers entered the US between January and June of this year, a 3.9% decline from the same period in 2016, the NTTO said.


Certain countries and regions - those most often criticised by the president - saw notable declines. For example, the number of visitors from the Middle East dropped nearly 30% compared to the first six months of 2016. Mexican visitors in June alone dropped 16% compared to the previous June.

Now travel-related industries are responding to the numbers.

“The latest government travel data is deeply concerning not just to our industry, but to anyone who cares about the economic well-being of the United States,” Roger Dow, CEO of the US Travel Association, a non-profit organisation representing and advocating for the travel industry, said in a statement.

Dow noted that travel supports more than 15 million American jobs - and lots of them are undoubtedly good folk, even if their tipping system sucks.

The White House did not respond to a request for comment from the Associated Press, so there is probably not much point in my asking for one.
Posted by Winsor Dobbin at 15:33