The ritziest address in Paris glitters once more

It is one of the ritziest addresses in Paris; a luxury hotel and chic brasserie right on the Avenue des Champs-Elysées that is a magnet for those who want to see and to be seen.

It's luxurious, even a little ostentatious, but never gauche. 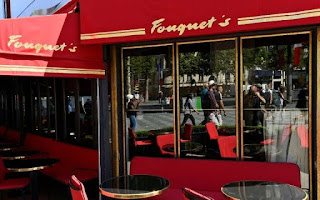 The newly renovated Hotel Barrière Le Fouquet's Paris and its brasserie are back on centre stage after six months of renovations under the care of interior designer Jacques Garcia.

The 81 rooms and suites, opened just a decade ago, have all been given a chic makeover, there is a new eatery and a spa and rooms start from €730 to €7900 (yes, that is per night).

The venerable brasserie, where you might be tempted to take out a mortgage to enjoy lunch, is now run in partnership with one of France's most talented pan-handlers, the former three-star Michelin chef Pierre Gagnaire.

He'll be serving up bistro classics like steak tartare or foie gras, as well as a lobster salad with fresh herbs, king crab claw with steamed bok choy and wasabi mayonnaise, and pan-fried squid with aubergine and chorizo.

The sole meuniere will set you back €80, that's $118 Australian, making grilled lamb chops with eggplant a bargain at €52.

Thank heavens for the six snails for €16, which you can pair with a glass of Veuve Cliquot for €26, or perhaps 10 grams of Dordogne caviar for €32 with a Bellini for €21.

There are two terraces, right on the Champs-Elysées and George V avenues, with the best seats much-sought after.

The famous red awnings will once again ripple as a welcome to those who want to enjoy a cocktail or two in the L'Escadrille bar, where a DJ will spin discs for the city's BCBG (fashionable set) and well-heeled tourists.

Fouquet's Brasserie was founded in 1899 by Louis Fouquet. Since 1990, the main room has been listed as a historical French monument. It is patronised by everyone who is anyone, from movie stars to politicians.

Check out the previous guests in an array of black and white photos that decorate the eatery.

A long, long time ago we used to have the occasional drink here. Maybe one glass of rosé on the terrace for old time's sake the next time we are in Paris.