Are you crazy about rugby union? Would you do anything to get up close and personal with the All Blacks?

Air New Zealand and New Zealand Rugby are searching the world for two All Black "apprentices" to join the world's leading rugby team as they take on Samoa in Auckland on June 16. 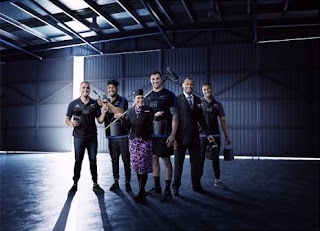 The "volunteer" positions are the first of their kind within the All Blacks camp. The apprentices will stay at the All Blacks’ hotel and assist the team both in preparation for the match and on game day, including         assisting in the setting up of the team’s Captain’s Run on the day before the game before joining the team for lunch;   attending an exclusive Q and A session with All Blacks head coach Steve Hansen and players.

The apprentices will also help to set up the All Blacks’ coaches box, sideline and bench on game day and watch the game from their own private sideline bench. One will also be responsible for running the ball on to the field for kick-off.

Air New Zealand will provide transport to Auckland from anywhere across New Zealand - or around the world - for the successful applicants along with up to three friends or family members each. They will also receive accommodation and apprentices will wear special custom-made uniforms.

Hansen, no doubt masking his real feelings about the promotion, says fans of any age can apply.

“The main thing is these people need to be All Blacks supporters through and through and demonstrate a true love of the game," he says.

“Like any position on the All Blacks team we expect these spots will be hotly contested so applicants really need to sell themselves and show us how passionate they really are.”

Air New Zealand spokesman Jodi Williams says the airline has been a proud sponsor of the All Blacks for more than 20 years.

“Together with NZR we wanted to create a truly awesome opportunity for fans to go behind the scenes with the All Blacks and do their bit to help the team prepare for the test match against Samoa,” he said.
All Blacks supporters can apply now at www.airnz.co.nz/blackout. Fans are encouraged to provide any supporting evidence of their suitability for this position – for example video, photos, written material or artwork. Applications close on June 5.

# This story is a re-work of an Air New Zealand press release.