What is the world's best airport? And what makes it such a regular winner?

While Australians argue about whether Sydney needs a second airport, and if so where it should be located, Singapore Changi Airport has been named the world's best airport by air travellers for the fourth year in a row.

At a time when passengers dread the bustle of London's Heathrow or Paris's Charles de Gaulle, Changi continues to entertain and enchant passengers. This is the seventh time it has picked up this award. 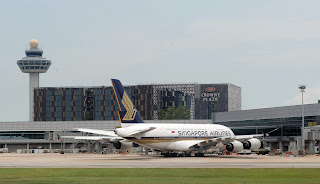 Changi Airport was also named the best airport in Asia, as well as the best for leisure amenities, including bars, lounges, cinemas, music deck, swimming pool, napping and rest areas and the in-terminal Transit Hotel.

Singapore's pride and joy - and it is seriously good -  edged out Incheon International Airport in South Korea for the top spot, ahead of Munich, Tokyo International (Haneda), and Hong Kong.

Six of the top 10 were in Asia and both Dubai and Abu Dhabi missed out.

"To be voted by customers as the world's Best Airport four years in succession is a most remarkable  achievement for Changi Airport Singapore and is clear testament to the airport's popularity amongst air  travellers," said Edward Plaisted, CEO of award organisers Skytrax.

"Changi Airport continues to innovate in both product and service options for its customers, and focus on making the customer experience at the airport as enjoyable and relaxing as possible.

"To be named by global travellers as the world's favourite airport for the sixth time in 10 years is a great reward not only to Changi Airport management but for staff across every section of the airport who contribute in every little way to Changi Airport operations." 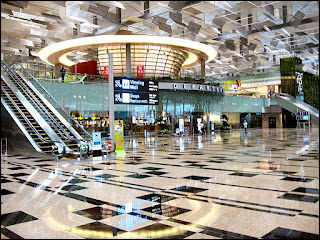 "This is a clear affirmation that we continue to hit the right notes in our pursuit of service excellence," said Lee Seow Hiang, CEO of the Changi Airport Group.

"We do not take this recognition for granted; it is the extraordinary effort and commitment of the entire airport community that drives Changi’s success." 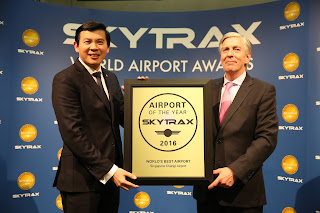 The 2016 World Airport Awards are based on 13.25 million customer nominations across 106 nationalities of air travellers, and included 550 airports worldwide.

Come the second-half of 2017, Singapore Changi Airport will unveil a brand new passenger terminal alongside its current three terminals – Terminal 4 (T4), designed to meet the operational needs of both full-service and low-cost carriers.

With the opening of  T4, Changi Airport’s handling capacity will be increased to 82 million a year - and even bolder plans are in place for the future.

For details see www.worldairportawards.com
Posted by Winsor Dobbin at 21:19