You meet the most interesting people in Vanuatu

It was a couple of years ago now, but we met Chief Dani Rusa (at least that's what he said his name was, communication was not easy) at the Sunday morning market in Luganville, the major town on the . A wizened but still wiry and proud old man with a long white beard and twinkling eyes, he told us he had walked two days to reach Luganville from his home village that was deep in the mountains and had no road access.

In deference to the more sophisticated locals, he had wrapped a piece of pink cloth around his lower extremities rather than the leaf he traditionally wears to preserve his modesty.

Accompanied by a younger assistant chief, whose name was not disclosed to us, he had made the trek to the big smoke to resolve a dispute with another tribe, a complicated affair involving a native plant being used to place a curse on the local courthouse.

The chief was confident the contretemps could be resolved the next day, after which he planned to return to his mountain people, who were renowned for shooting at US aircraft with wooden bows and arrows during World War II.

Speaking bislama, the local pidgin language, through an interpreter, he told us that he was no stranger to conflict. He smiled as he told us how he fought with notorious rebel leader Jimmy Stevens in the Coconut Rebellion back in 1980.

It was a would-be coup that made worldwide headlines at the time. "I was one of Stevens' main men," the chief proclaimed.

Stevens is remembered as the leader of a ragtag band of leaf-wearing rebels who staged a coup on Espiritu Santo before the New Hebrides, then jointly ruled by and , became the independent nation of .

The leader of the Nagriamel movement, Stevens declared the independence of the “State of ” in June 1980 and referred to himself as the prime minister.

After the was granted independence in July, Prime Minister Walter Lini deployed Papua New Guinean troops and the revolt was crushed without serious bloodshed.

Stevens died in 1994 but his followers, like Chief Rusa, still wear arm patches signifying membership of the rebel organisation.

On this day, however, Chief Rusa, also wearing a Boston Celtics beanie and a necklace, was more interested in shopping than rebellion as the two mountain men perused the yams, pineapples and other fruits and vegetables on offer in the simple market (below). 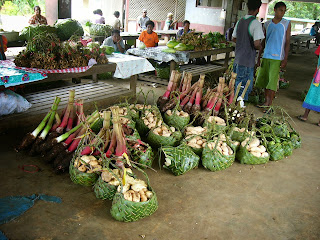 Life here moves at a slower pace; there are a handful of places to stop in the Santo capital of Luganville, with the hilltop Deco Stop Lodge a pleasant place for a stay, or for lunch beside the pool.

Accessible only by water are the Aore Resort and Bokissa Private Island Resort, both great for lovers of water sports, particularly scuba diving.

is absolutely beautiful and offers daily cruises to for snorkelling with turtles, swimming in blue holes and peaceful river inlets, kayaking and a barbecue lunch.

Wherever you go in , but most particularly on Santo, you’ll find links with World War II.
James Michener was inspired to write Tales of the South Pacific while he was stationed on Santo.

The island is the home of the world's best dive wreck, the SS President Coolidge, a cruise liner turned troop ship that was sunk by the US military’s own mines with 5000 troops on board,. All but two survived.

She lies intact on her side and is easily accessible, as is the USS Tucker, off .
Just down the road from the Coolidge is Million Dollar Point, where the Americans dumped jeeps and other heavy equipment into the ocean at the end of the war. Our guide also took us to the wreck of a World War II bomber slowly being overtaken by the foliage.

Given the sleepy state of Santo today, it is hard to believe that it was once the second-largest US base in the Pacific after and was home to over 40,000 troops at any one time. Those troops included Michener and future president John F. Kennedy, while Eleanor Roosevelt visited in her role as ambassador for the Commander In Chief.

Today, however, is the land time forgot, which makes the 83 tropical islands that make up the nation ideal for getting away from it all. Service can be slow, or haphazard, but you just have to go with the flow.

It’s also home to the John Frum Cargo Cult, devoted to US servicemen who visited in World War II, and another tribe who, somewhat bizarrely given his disdain for anyone not wearing a suit, believe that Prince Philip is their saviour.
is famous for the land diving ritual – the original bungy jump (held each April and May), but most tourists base themselves on the main , in and around the somnambulant capital of Port Vila.

’s On The Bay offers modern rooms with all amenities within walking distance of downtown Port Vila. There’s an on-site spa and good restaurant. Ideal for anyone who wants to be close to the action. www.chantillysonthebay.com.
Posted by Winsor Dobbin at 17:30