Norfolk Island has long been seen a vacation destination for seniors; and for those looking for somewhere quiet to get away from it all.

It's still a quiet spot, make no mistake, but Australia's own South Pacific hideaway now has plenty to offer epicurean visitors looking for a younger, hipper gourmet destination. 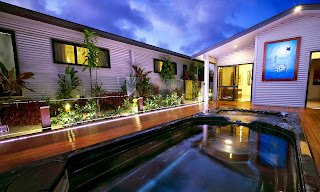 First there is The Tin Sheds (right), the first five-star accommodation option on the island. It's so funky each of the three luxury villas comes with its own colour-coded Fiat 500 convertible.

The spacious and contemporary apartments here are surrounded by beautifully landscaped private courtyards and equipped with all mod cons. There is on-site plunge pool, massage and sauna facility, gym - even a Nespresso machine in each villa.

Just down the road, check out Minibar, Norfolk's funkiest bar, based on an eclectic Berlin style-bar built and furnished from Norfolk found objects. It's a great spot for a late-night cocktail.

Then there's the restaurants; focusing on local produce and serving fish so fresh it was swimming in the Pacific earlier in the day or maybe serving locally produced cheese from the Christian Bothers (yes, that really is their name).

The best eateries include casual Dino’s at Bomboras (where the pizzas are excellent), Norfolk Blue, where the focus is dishes made from beef grown on the owners’ farm, and the terrific Hilli Restaurant and Wine Bar, where you can eat indoors or al fresco and the fish (below) is very good, as is the wine list. 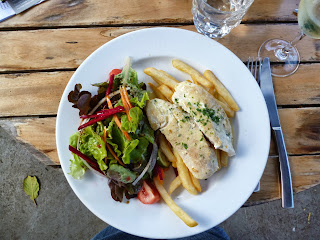 The Rock is a very good steak and seafood restaurant, while La Perouse serves French-accented cuisine and Bailey’s features terrific lunch specials for $10 that are brilliant value.
.
Good local lunch spots include The Olive Cafe, the bustling Golden Orb (which is also a bookshop and is set in a sub-tropical garden) and Sublime Cafe with its, well, sublime views.

Discovered by Captain Cook in 1774 after first being settled by Polynesians, Norfolk Island is a small scenically beautiful island located in the Pacific Ocean between Australia and New Zealand. It's a former penal colony and home to many descendants of the mutineers from The Bounty.

It has a sub-tropical climate with temperatures rarely over 28 degrees or under 10 degrees and from the air it looks much like Fiji. It covers just 8 kilometres by 5 kilometres and New Caledonia, 770 kilometres away, is the nearest inhabited neighbouring island.

The mood here is ultra laidback. Cows have right of way on the roads and feral chickens roam everywhere. There are between 1,800 and 2,800 residents, depending on the season and there are no chain hotels, fast-food restaurants, public transport or traffic lights – and only one roundabout.

Because it is never cold here, tropical fruits like bananas and guavas thrive. There are tiny farmers’ markets selling fresh local produce, several very good restaurants with a local focus, a winery – and even a local liqueur producer .

The markets are held on Saturday mornings next to the Visitor Information Centre and on Sundays there is an arts and crafts market – the ideal place to pick up a local memento or two.

Epicureans are well catered for with the Norfolk Island Blue beef and a cooking school at Mastering Taste Chef School and Garden Tour, where students can pick many of the ingredients from the potager.

Rodrick McAlpine at Two Chimneys Winery is about to release his first wines made using local grapes; until his vines became mature he has been using fruit from the mainland. Two Chimneys offers tastings and serves excellent local platters (below). 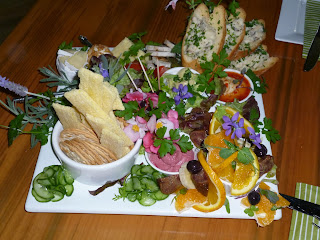 Also check out the tasting rooms at Norfolk Island Liqueurs, where local fruits are used in products made in a German still; including macadamia nut, guava and banana liqueurs, beautifully presented and absolutely delicious. Also make time to visit the Anson Bay coffee plantation of Fred Wong, who also offers tastings and tours.

There's history galore here - including four museums - but other attractions include great beaches, trips over the reef in glass-bottomed boats, one of Australia's oldest golf courses and fishing. Trumpeter, snapper, yellowfin tuna, kingfish and wahoo abound.

Norfolk Island was once regarded as “a place of ultimate punishment” but I can’t think of many better destinations to wine and dine, and wind down, for a few days.

Air New Zealand flies direct to Norfolk Island twice a week from both Sydney and Brisbane. To book visit www.airnewzealand.com.au.