Bruny: The island with the lot

Whether you enjoy hiking, camping, wildlife or gourmet goodies, Bruny Island has plenty to offer.

The first thing that hits you is the lack of noise. Bruny is the same size as Singapore, but has a population of fewer than 1000 rather than 4.5 million.

Tasmania’s fourth-largest island is just a 30-minute drive and 15-minute car ferry ride south of Hobart via the Mirambeena, which operates year-round. It’s close to 100 kilometres from tip to tail and can be almost deserted midweek, making it the perfect escape from city hustle and bustle with limited mobile reception, beautiful beaches (Adventure Bay, below) has been
named among the best in Australia) and dramatic scenery. 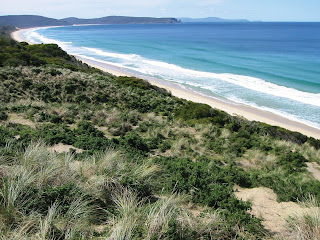 Then there's the local critters. From white wallabies to quolls and pademelons, a colony of fairy penguins and all manner of birds, from parrots to perky little red-breasted creatures, the island is alive with them. Fur seals inhabit rocky outcrops and can be seen on adventure cruises operated by Rob Pennicott’s Bruny Island Cruises.

Also keep an eye out for sea eagles, albatrosses and – during the season – dolphins and whales. We had to slow down to allow a sluggish echidna to cross the road.

Bruny Island was first sighted by Abel Tasman in 1642 and named after Rear Admiral Bruny d’Entrecasteaux, who visited the island in 1792-93.
Captains Furneaux, Flinders, Cook and Bligh all anchored in Adventure Bay, which takes its name from Furneaux’s ship and the tiny Bligh Museum of Pacific Exploration at Adventure Bay and the Alonnah History Rooms are both open to the public.
There are several cafes on what are effectively two islands joined by a narrow isthmus and gourmets will be in their element here with smoked fish and delicious dips from the Bruny Island Smokehouse, a selection of artisan cheeses and wood-fired breads from Bruny Island Cheese, fresh oysters from Get Shucked and wine tastings at Bruny Island Premium Wines, Australia’s southernmost vineyard.
In summer, pick up fresh berries from the Bruny Island Berry Farm – pick your own if you enjoy working for your supper.
There’s just one pub, and only one petrol station, so it pays to plan ahead if you need a beer or to fill the tank.

Most of the accommodation here is self-catering, or camping. There are no five-star resorts or big brand hotels.

Adventure Bay Retreat, just a short walk from the beach, is a great place to spot wildlife at night. It comprises two styles of boutique accommodation: a three-bedroom lodge that accommodates up to eight people and a smaller cottage. 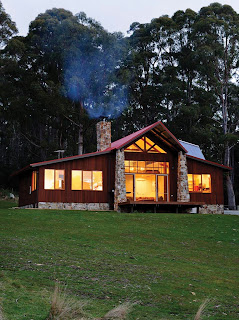 The lodge (right) has two bedrooms featuring king-sized beds, fitted with goose and down feather mattress topper, plus quilt and king-sized pillows, along with a third bedroom with two sets of bunks. One of the bedrooms includes an en-suite bathroom with a free standing designer stone bath placed by the windows to relax in the bath and watch the busy wildlife outside. An outside deck features a barbecue and the retreat is fully equipped with fridge, coffee machine, kitchen, TV, DVD player and music system.

The cottage, which is designed for couples, has a king-sized bed and a large two-person sized spa bath surrounded on two sides by glass. It is also fully equipped for self-catering with in-floor heating, combustion wood heater and double glazing ensuring a cosy stay. The lodge costs from $300 per couple per night and the cottage from $240.

Another alternative is All Angels Church House, a delightfully converted former church that can accommodate up to five people.

Bruny Island is part of the Huon Trail, which meanders its way through the southernmost part of Tasmania. Next stop Antarctica.

Adventure Bay Retreats offers a three-bedroom lodge suitable for up to eight people and a spa cottage for couples looking for a romantic weekend away. Phone 0419 300 392 or visit www.adventurebayretreat.com.au

All Angels Church House, a former church converted into a comfy cottage, can cater for up to six people and has a log fire for winter. Phone (03) 6293 1271. www.brunyisland.com.